Employed but still homeless, working poor say "Homelessness can happen to anybody" - Houseless.org

Recession is over? You sure? Absolutely sure?

I pray that we all look deep into ourselves to know WHY it has become apparently so easy to not "be about it" when it comes to actually involving ourselves and our lives in the lives of those who are struggling.

Sure there have been OH so many 501(c)(3)'s spring up to help, but are they doing enough?
Are they not also helping themselves by creating a way of employment via the struggles of others?

Would it not be more righteous for each one of us to take it upon ourselves to "be about it" without putting it off onto others?
WELL?

We are human, watch us "be about it"!
Michael Love, IIO

Below is an article which unfortunately still holds true to this date, 28 December 2012:

Employed but still homeless, working poor say "Homelessness can happen to anybody"

Before the sun rises, Cindy and Patrick Kennard wake their three daughters, fold their cots in a Sunday school classroom and pack their lives into suitcases.

“This is an every Sunday ritual,” said Cindy Kennard.  “It’s something that we do every week and so it just becomes natural.  We know the best thing is to get up and keep moving.”

The Kennard family of five from Johnson City, Tenn., is homeless. Perhaps the most surprising thing about the Kennards is that despite their homelessness, they are still a working family.  For the last seven years, Patrick Kennard has worked a full-time job with benefits at a bank call center and until recently, Cindy Kennard worked as a director of a daycare facility.

“When we fell, we fell hard and we fell fast,” Cindy Kennard told NBC News’ Ann Curry in an interview airing Thursday, Nov. 29 on NBC’s Rock Center with Brian Williams.

The Kennards are one of a growing number of working families who have become homeless. In the wake of the recession, experts say that families like the Kennards represent a historic juncture when it comes to homelessness in America.

“It’s hard sometimes for people to appreciate.  They’re so used to the stereotyped homeless populations, the visible homeless, if you will, who live outdoors in public locations and they’re not aware that there are literally hundreds of thousands of people, many of them working, who are homeless as well,” said Dennis Culhane, a University of Pennsylvania social policy professor whose research focuses on homelessness.

“There are more children homeless now than have ever been before,” Culhane said.

For Patrick Kennard, the feeling that he’s failed his three daughters, 9-year-old Jillian, 14-year-old Melodie and 16-year-old Brianne, sends him into despair.

How to help the families featured on our show


Cindy and Patrick Kennard, married 19 years, worked hard to pursue the American dream. They have college degrees. Both tried to build their savings as they worked. Their dream began to crumble when Patrick Kennard suffered kidney problems that led to expensive hospital stays and mounting medical bills. Even with the health insurance he had from work, the family still owed around $5,000. Their car broke down repeatedly, costing them more than $3,000.  The couple's debt began to mount.

Combining their student loan debt and medical bills, they found themselves more than $35,000 in debt.

Unable to afford child care, Cindy Kennard was forced to quit her job leaving them with only her husband's income, around $35,000 a year. The family was living paycheck to paycheck and still did not have enough to cover their monthly expenses.  They became behind on their rent.  They downsized to a cramped two-bedroom apartment from their more spacious four-bedroom apartment. Again, they were unable to afford rent and were evicted.

“I wanted to dig a hole and let somebody cover me up,” said Cindy Kennard.

The youngest Kennard, 9-year-old Jillian, took the eviction news especially hard. “I was scared because I loved the house and I didn’t want to leave it,” she said.

The Kennards pondered living in their van or at a campground. They made heart-breaking decisions, including pawning their wedding rings for $100.

“One of the hardest things that I’ve ever had to do was to sell my wedding band,” Patrick Kennard said. “That ring on my finger meant the world to me.”

For Cindy and Patrick Kennard’s daughters, being homeless means living a life of uncertainty and sometimes shame.

Through tears, 16-year-old Brianne described the hardest part about being a homeless kid: hoping no one finds out.

“Sometimes when we’re on our way to school, we have to ride up here in, like, a church van and people can probably see that and then they probably wonder why,” Brianne said. “But people finding out is probably one of the scariest things.”

Brianne has told a few of her close friends who have kept her secret. She was willing to speak publicly about it for the first time because she wants to help other kids like her.

“When we became homeless, we lost everything but our faith and that’s what I would say is don’t lose your faith,” said Brianne of her advice to other homeless families.

“I didn’t want everybody to laugh at me,” she said.

When her friends left school and returned to their homes, she went to a shelter. Jillian said, “I felt happy for them because they had a house and I didn’t.”

The red-headed little girl clings to a pink bird house she built out of popsicle sticks, glitter and glue because it reminds her of the family’s old home.

She sometimes has nightmares and dreams of one day having a slumber party in her own room with a bed covered in Tinkerbell sheets.

The family has moved 15 times in the last four months. Through a church and community program sheltering homeless families called the Interfaith Hospitality Network, the family rotates to a different Sunday school classroom each week.

“I had the stereotypical man holding up the sign, ‘Will work for food, have family, need help’ and I never realized how close I was to being that person,” Patrick Kennard said.  “Homelessness can happen to anybody.  We’re proof of that.”

Brian Rosecrance runs the Interfaith Hospitality Network’s chapter in Johnson City, Tenn., that’s been helping the Kennards as they find their financial footing. He said he has seen a distinct change in the families seeking help.

“In the past three, four years, we’ve seen higher-educated people.  We’ve seen people who are currently employed coming to us.  We’ve seen a lot of families with job layoff situations where they were laid off a month or two ago and now they’re homeless,” Rosecrance said.

Rosecrance said his waiting list of families needing help continues to grow. Part of what makes the Interfaith Hospitality Network unique is that it allows families to stay together.

“One thing that I've seen for as many years as I've been doing this is a real resilience with these families,” Rosecrance said. “And I think that's the whole secret.  That, you know, mom and dad don't have to go one place while the kids stay with other relatives or they don't have to be separated in a shelter between men and women.”

Advocates say there are not enough shelters for the nation’s new wave of homeless families and many shelters separate men and women because of security reasons.

Shaun Donovan, the secretary of HUD, said that shelters must begin to use their funding differently to accommodate the rise in homeless families. He acknowledged that family-friendly shelters are under-funded.

“I’m not satisfied that we have the full amount of resources that we need and we will continue to fight for more,” Donovan said.


Back in Tennessee, the Kennard sisters say that they are learning unexpected lessons from homelessness.

The family recently received some good news.  The church shelter they’ve been staying in offered them a grant to help them pay rent for up to five years.  The family is expecting to move into a four-bedroom apartment next week.

Perhaps Jillian will now be able to put down her bird house and decorate her own room with Tinkerbell décor. 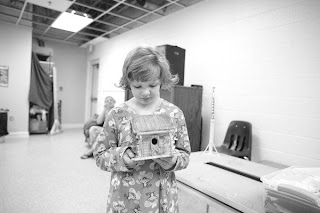 To help Darlene Gaines and her sons: Email Darlenegaines2012@gmail.com

Organizations Featured in Our Report
Interfaith Hospitality Network
Our House