Will huts such as the "Conestoga Hut" be what houses "The Houseless" in the future?

"Houseless", not homeless!
OK, having a plan and structures to better help "The HOUSELESS" are great ideas, but what about each of us doing what is natural with genuinely getting involved with opening our doors - especially church's -, actually learning the "why", "when" and "how" of "The HOUSELESS"?
WELL? 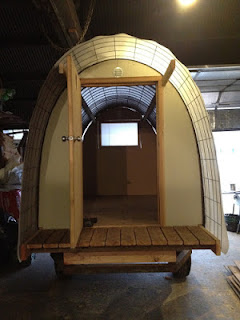 Advocates say the structures could be part of Opportunity Village

The Rev. Dan Bryant and other advocates for the homeless in Eugene hope that with just a few innovative huts they can sow the seeds of an entire village for the homeless.

Bryant and other members of Opportunity Village Eugene want city permission to install a few small, portable huts at some of the city’s official vehicle-camping sites, as a first step to creating a permanent Dignity Village-type homeless housing area.

But it’s uncertain whether the city can or will allow the structures at the vehicle-camping sites. To do so might require the City Council to change a city ordinance.

Also unknown is whether state building codes, which govern local construction standards, would permit the simple structures to be used for overnight sleeping.

People who would live in the proposed simple huts in Eugene could become the first residents of a homeless village, once that was established, said Bryant, president of the nonprofit Opportunity Village Eugene.

“We can build a community of people that would move into the village,” he said.

Bryant and other advocates for the homeless want the city to provide a site for the pilot homeless village. After months of discussion, the City Council has yet to officially endorse the idea of a village, let alone pick a site.

The City Council on Monday evening is to resume discussion of the village idea.

With cold, wet weather here, and impatient with the council’s prolonged analysis of the topic, Bryant and homeless advocates are looking for private property for the village. So far, they’ve been unsuccessful.

Now, they hope the huts designed by Erik de Buhr of Eugene will provide initial shelter at vehicle-camping sites for homeless people, who eventually would move to the larger structures at the homeless village, wherever that turns out to be.

The 6-foot-by-14-foot wood-frame structures, called Conestoga huts, are made of plywood and siding, with a vinyl roof. Mounted on concrete blocks and treated beams, the huts would provide enough room to shelter one or two people.

But Bryant and other advocates for the homeless are waiting to hear whether the city will allow the huts at the city’s vehicle-camping sites, which are managed by St. Vincent de Paul.
The city ordinance governing the program allows people to sleep in vehicles, including motorhomes and trailers.
A property — public or private — is allowed to house up to three vehicles. The city pays for a coordinator and, in some cases, portable toilets and garbage collection for the campsites.

Earlier this year, in an effort to provide more places for homeless people to live, the City Council expanded the ordinance so tents are allowed at the sites.

Only two tents are currently being used at 38 spaces in 14 vehicle camping sites in Eugene.
With their harder exteriors and lockable doors, the Conestoga huts would be better for homeless people than tents, said St. Vincent de Paul Director Terry McDonald.

“If you go off and leave your tent, your property is vulnerable,” he said.

Bryant is hoping city attorneys will consider the huts “hard-sided tents” when they answer whether the ordinance allows the structures at the vehicle camping locations.

City staff also are looking into whether the state building code would allow use of the huts as a place for people to sleep.

The City Council on Monday is expected to get answers to those questions.
Churches may allow huts

Bryant said a couple of churches might allow the huts on church property as part of the city’s vehicle camping program.

Bryant also hopes that the huts could be placed on a city property, perhaps at one of the five sites under consideration.

With city siting permission, a few huts could be manufactured and put in place within a couple of weeks, Bryant said.

“If it’s legal under the car-camping ordinance, we’ll be ready to go before the end of the year,” he said.

The huts can be made from donated and recycled materials, said de Buhr, who made one recently at his south Eugene home and shop that on Monday will be displayed downtown at the Park Blocks from 4 p.m. to 9 p.m. Depending on the amount of donated wood, vinyl and other items, the material cost per hut could range from $250 to $550, he said.

Donations to Opportunity Village Eugene, including a $3,000 gift from one of Bryant’s congregation members, could pay for several huts, Bryant said.

Meanwhile, another group is asking the City Council to eliminate the city’s ban on overnight camping on public property, including city parks.

The group, Eugene SLEEPS — SLEEPS is an acronym for Safe Legally Entitled Emergency Places to Sleep — says the overnight sleeping ban unfairly forces homeless people to sleep out of sight in bushes and on the riverbanks, where they are robbed, raped and assaulted.

“Because they are hidden, they are victims and prey for people who are criminals,” said Jean Stacey, a SLEEPS organizer.

If the city lifted the ban, homeless people could camp together in designated areas in city parks, she said.

The city could provide portable toilets and garbage cans at the sites, said Stacey, who is a board member of Opportunity Village Eugene.

Also, the city should rescind its prohibition on fires in parks so homeless people at the sites can cook food and stay warm, she said.

The city’s restrictions ignore the reality that many people now live on public land, “peeing and pooping and having fires,” Stacey said. “But they are out there with no supervision. People are getting raped. They are having their things stolen.”

Allowing homeless people to legally gather on public property would let them form “self-regulating communities” where they could protect themselves and their belongings, she said.
“The city should do it,” Stacey said. “It’s minimal, basic.”

The City Council has yet to discuss ending the camping prohibition.

Stacey and other members of Eugene SLEEPS have begun lobbying the City Council to remove the ban.

SLEEPS on Monday will have a 6 p.m. “camp-in” rally at the Wayne Morse Free Speech Plaza, in front of the Lane County Courthouse.

Later in the evening, members will attend the City Council meeting and ask councilors to revoke the camping ban, Stacey said.

The Eugene City Council this evening will discuss establishing a homeless village.

EUGENE, Ore. (KMTR) – A Eugene company's building experiment may translate to some major help for the local homeless population in Lane County and beyond.

The company, called the “Tine Hive Experiment,” is behind the project called a “Conestoga Hut.” The hut is a 10-foot long, 6 foot wide, and around 6 foot tall structure that designers hope could be the future of helping temporarily house the homeless in Eugene.

The company has designed a “pilot” version of the hut that it plans to show off this week.

Each unit is made of 2x4 boards and plywood for the flooring. Making up the roof is a metal half-circle or a “cattle grate.” Over that is a piece of plastic tarp on the outside. Inside is a piece of mylar, designed to hold the heat in.

Each unit also has its own doors with a lock and a window on hinges.

Erik de Buhr helped come up with this idea with others in the Tine Hive Experiment. De Buhr says much of the planing for the pilot hut came during the “Occupy Eugene” movement in December 2011.

Crews made the first hut in response to a single mother with a child needing a place to stay that was warmer and dryer than a tent. De Buhr and his friends came up with the first hut, raising it about a foot and a half above the ground, then making a water proof, insulated roof.

Material wise, de Buhr estimates that each hut costs about 350 to 500

dollars. They're aiming to bring much of that cost down through donations of old materials though. The huts could be put up in a few hours, with a volunteer crew according to project leaders.

De Buhr says the potential is huge for this project.

"For anybody that's slept outside in the cold, the amount of effort it takes you to actually get going the next day and do something is a lot harder than if you have a warm place to be. So it can benefit people in that way, but think a lot of it is the psychology of having a place that you can call your own and that it's secure,” says Erik de Buhr, co-creator of the Conestoga Hut.

De Buhr and others are hoping that the huts could be what house people at the city's proposed homeless camp called "Opportunity Village Eugene.”

The crews will show off the hut to the public on Monday, December 10th, 2012, at the East Park Block in downtown Eugene. That's right across from the Lane County Public Service Building. Crews will have the hut set up from 4 p.m. to 9 p.m.

Eugene City Council could also vote on the site of the proposed camp at a council meeting that night.
Organizers are hoping to put the huts together in a "kit" like package and they're looking to get donations for the materials to build them. If you're interested in helping, contact Opportunity Village Eugene at the following website: http://www.opportunityvillageeugene.org/.