A picture of a young woman posing in front of a mural on Sunset Boulevard, Los Angeles, has gone viral, not only for what it does show, but also for what it doesn't — empathy.

The image that is getting Internet users so riled up was taken by estate agent and Silver Lake resident Rich Michalowski, who posted it to his Facebook page on Sunday with the caption, "Really?"
It shows the woman getting her photo taken by a companion, with her hands outstretched and a beaming smile on her face, in front of the mural by artist and author Dallas Clayton, which invites people to "stand here and think about someone you love." Also in the shot, lying at her feet, is a homeless man.

Whoever she was thinking about it wasn't the man on the ground behind her.

"The photographer was directing the woman on where to stand, how to pose and suggested she take off her jacket," Michalowski told website TakePart. "At one point the photographer directed her to move closer to the homeless man so she could center the photo. They were still at it when I drove away. [sic]"

More: Young girls' act of kindness reminds us that not all teenagers are selfish

Most people have condemned the two women for taking the photo.

"There's a certain amount of irony involved in posing for a warm fuzzy picture while trying not to stand on a homeless man's head," wrote Patrick Morris on Facebook.

However some have defended the women. "When there is a homeless man in front of the grocery store camped out asking you for money… most people still walk right by and do their shopping… so I am not going to be pissed at these girls for wanting an instagram photo," wrote Crystal White-VanCleemput.

The artist Dallas Clayton told TakePart that he "felt sorry for everyone involved" when he saw the picture.

Clayton also made an important point about how society as a whole treats the homeless. "I think a lot of people want to judge others when they are in situations like this — make comments like 'this is what's wrong with the world,' but I don't assume the girls in the photo are cruel or terrible people who hate the homeless or think themselves better," he wrote. "I just imagine there to be a disconnect, likely a systemic disconnect that allows someone to move through the day like that."

This photo many have been taken in L.A. but homelessness is an issue across the world. Think about how many homeless people you see on the streets of every U.K. city. Will Michalowski's image make you think twice about ignoring them?

"If it takes this photograph for you to realise [sic] that [a disparity between the haves and the have nots exists] I don't imagine you've been paying attention to society as a whole for the past fifty or sixty years," Clayton wrote on his Facebook page. He also announced that he would be giving 100 percent of the proceeds from a new range of illustrations to an organisation that helps the homeless. 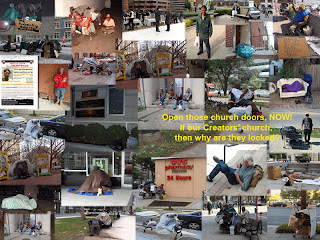