After Recession, More Young Adults Are Living on Street - Houseless, not homeless! 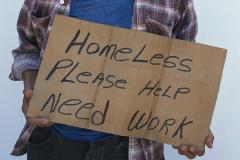 Why is it that the young citizens of the United States of America live in shelters, on the streets, in the woods and some even being pimped, while so many millions of non-U.S.A. citizens and even those in the U.S.A. illegally can go to an abode, lock their door and rest in their bed?
OH, that's right, they have the jobs U.S.A. citizens can't get.
It has long been said that they do not want them; will not do the work and even they are just too lazy. These are all excuses for others to profit/gain/control for themselves or their network.

In efforts to secure his win for re-election, Mr. Obama gave away 800,000 jobs that U.S.A. citizens could do, to those in the U.S.A. illegally.
Not to mention Mr. Obama's continued support of allowing those from abroad come and take work away form U.S.A. citizens, especially Veterans and the young.

If your young person was unable to gain work or found that the same said young person was let go so a non-U.S.A. citizen could have the work, then let the Obama administration know, as well as, the Department of State. Both have been giving work away for years. The Obama administration is not the only one giving away work to non-U.S.A. citizens. Others before him have done so as well.

For an ongoing tracking of those hiring non-U.S.A. citizens instead of U.S.A. citizens, go to "The List" here:
http://americansnotwanted.blogspot.com/p/list.html

The U.S.A. has to start treating its young U.S.A. citizens better, or the crimes it's doing unto its own citizens WILL come back to haunt U.S.A..

Young and Homeless: The Times’s Susan Saulny reports from Seattle where she talks with young adults who are struggling with homelessness as a result of the recession.

place when he lost his job in a round of layoffs. Then he found, and lost, a second job. And a third.
Now, with what he calls “lowered standards” and a tenuous new position at a Jack in the Box restaurant, Mr. Taylor, 24, does not make enough to rent an apartment or share one. He sleeps on a mat in a homeless shelter, except when his sister lets him crash on her couch.

“At any time I could lose my job, my security,” said Mr. Taylor, explaining how he was always the last hired and the first fired. “I’d like to be able to support myself. That’s my only goal.”

Across the country, tens of thousands of underemployed and jobless young people, many with college credits or work histories, are struggling to house themselves in the wake of the recession, which has left workers between the ages of 18 and 24 with the highest unemployment rate of all adults.

Those who can move back home with their parents — the so-called boomerang set — are the lucky ones. But that is not an option for those whose families have been hit hard by the economy, including Mr. Taylor, whose mother is barely scraping by while working in a laundromat. Without a stable home address, they are an elusive group that mostly couch surfs or sleeps hidden away in cars or other private places, hoping to avoid the lasting stigma of public homelessness during what they hope will be a temporary predicament.

These young adults are the new face of a national homeless population, one that poverty experts and case workers say is growing. Yet the problem is mostly invisible. Most cities and states, focusing on homeless families, have not made special efforts to identify young adults, who tend to shy away from ordinary shelters out of fear of being victimized by an older, chronically homeless population. The unemployment rate and the number of young adults who cannot afford college “point to the fact there is a dramatic increase in homelessness” in that age group, said Barbara Poppe, the executive director of the United States Interagency Council on Homelessness.

The Obama administration has begun an initiative with nine communities, most of them big cities, to seek out those between 18 and 24 who are without a consistent home address. New York, Houston, Los Angeles, Cleveland and Boston are among the cities included in the effort.

“One of our first approaches is getting a more confident estimate,” said Ms. Poppe, whose agency is coordinating the initiative.

Those who provide services to the poor in many cities say the economic recovery has not relieved the problem. “Years ago, you didn’t see what looked like people of college age sitting and waiting to talk to a crisis worker because they are homeless on the street,” said Andrae Bailey, the executive director of the Community Food and Outreach Center, one of the largest charitable organizations in Florida.

Los Angeles first attempted a count of young adults living on the street in 2011. It found 3,600, but the city had shelter capacity for only 17 percent of them.

“The rest are left to their own devices,” said Michael Arnold, the executive director of the Los Angeles Homeless Services Authority. “And when you start adding in those who are couch surfing and staying with friends, that number increases exponentially.”

Boston also attempted counts in 2010 and 2011. The homeless young adult population seeking shelter grew 3 percentage points to 12 percent of the 6,000 homeless people served over that period.

“It’s a significant enough jump to know that it’s also just the tip of the iceberg,” said Jim Greene, director of emergency shelters for the Boston Public Health Commission.

In Washington, Lance Fuller, a 26-year-old with a degree in journalism, spent the end of last month packing up a one-bedroom apartment he can no longer afford after being laid off. Mr. Fuller said he had been unable to keep a job for more than eight months since graduating from the University of Florida in 2010.

“Thankfully, I have a girlfriend who is willing to let me stay with her until I get back on my feet again,” said Mr. Fuller, who writes a blog, Voices of a Lost Generation. “It’s really hard for people in my generation not to feel completely defeated by this economy.”

Mr. Taylor, the fast-food worker in Seattle, said he felt lucky when he could find a coveted space at Roots, a shelter for young adults in a church basement. Such shelters are rare.

For generations, services for the homeless were directed to two groups: dependent children and older people. There was scant attention focused on what experts now call “transitional age youth” — young adults whose needs are distinct.

“I see them coming back day after day, more defeated, more tired out, wondering, ‘When will it be my turn?’ ” said Kristine Cunningham, executive director of Roots. “And it’s heartbreaking. This is the age when you want to show the world you have value.”

They need more than just clean clothes and shelter to move into a secure adulthood, experts say. “They want a way out,” said Ms. Poppe, whose agency is also gathering evidence on what kinds of programs and outreach work best. “They want an opportunity to develop skills so they are marketable in the long term.”

“A more individualized approach seems to work,” she added.

But two obstacles stand in the way: young adults, eager for independence, are reluctant to admit that they need help and housing. And shelters designed with young adults in mind — those with career and trauma counseling, and education and training programs — are usually small.

Roots holds only 35 people, and a nightly lottery decides who gets a spot, which includes meals, laundry services and counseling. It is expanding to 45 beds.

Anna Wiley, 20, and her boyfriend, Bobby Jollineau, 24, spent several nights at Roots two weeks ago, but were unable to get in one night in November. “We ended up sleeping outside,” Mr. Jollineau said.

“I have a sleeping pad and a really warm sleeping bag. There’s a couple of nooks and crannies that are safe around here, but you have to be careful. It can make for a rough night.”

Asked whether she could go to her parents’ home, Ms. Wiley said that her father is unemployed and that her mother works in a deli, making about as little as she does.

“I don’t like relying on other people too much, anyway,” she said.

Across town, Roman Tano, 20, woke up recently at YouthCare’s James W. Ray Orion Center, another shelter for young adults that offers training programs. In October, its capacity grew to 20 beds from 15.

Two months ago, Mr. Tano gave up an apartment in his native Dallas after losing his job. He sold his Toyota and sought opportunities in the Pacific Northwest.

He rented a room and set out with his résumé (expertise: fund-raising). But when his $2,000 in savings withered to nothing, “I ended up sleeping on the street for the first time in my life,” he said. “I just kind of had to walk around and try to stay warm.”

Mr. Tano found the YouthCare shelter online, and has been staying there for a month. He has a new job as a canvasser for an environmental organization.

“Coming into it, I was, like, completely out of my element,” he said of YouthCare. “But in the time I’ve been here, it’s a pretty diverse group of people. There are a lot of people just trying to work to get out of this.”

“After I get my paycheck,” he said brightly, “I should be on my way.”

A version of this article appeared in print on December 19, 2012, on page A16 of the New York edition with the headline: After Recession, More Young Adults Are Living on Street.

& this article published on an earlier date by

By CRAIG BLANKENHORN
There are 1.6 million homeless children in the United States. I want to be the witness to this, to provide evidence of their bleak condition. I want to speak for the victimized children of our country who aren’t even fully cognizant of their own poverty. Infants, young children and teenagers are living on the streets, in hotel rooms and in their parents’ cars, forsaken by bad luck. It is my hope that these photographs will show this problem to those who are unaware or have done their best to ignore this issue.

The families who were willing to share their stories made this project possible. I have photographed them in cities around the country, including Janesville and Beloit, Wis., Kissimmee, Fla., and in Essex County, N.J.

Recently, I spent a week with homeless families in Tampa, Fla., site of the Republican convention. The common refrain of the parents was this: “It’s the kids — they don’t deserve this.”

Craig Blankenhorn is a recipient of a National Endowment for the Humanities grant and has work in the permanent collection at the Museum of the City of New York.

A version of this op-ed appeared in print on September 2, 2012, on page SR9 of the New York edition with the headline: Young and Homeless.