With the United States of America having available an enormous number of vacant buildings, houses and structures, let alone all of the churches about, why are humans left to reside outside in the wild of urbanism?

Is this the same United States of America that demands from the rest of the world that they treat their citizens better than this?
Well?

Why then does the United States of America get away with treating its own citizens as "Last Class Citizens" when other countries can't be as such, without those from the U.S.A. breathing fire down their throats?
WHY? 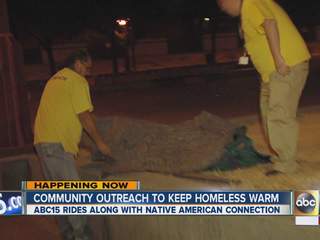 By: Steve Kuzj
PHOENIX - Arizona’s cold snap is going to be hard on plants, pipes, and pets, but even worse for the homeless.

Many are forced to sleep outside through the cold and possibly rainy nights while taking shelter under bridges. It might not be pretty, but for hundreds of homeless people, it's a way to survive freezing rain.

If it wasn't for groups like Native American Connections, many may have already died. The non-profit organization helps homeless people of all ages and races around Phoenix.

With bad, freezing weather moving into the Valley, two of their community outreach members spent their Thursday evening making sure the homeless were as comfortable as possible.

ABC15 traveled along with Pedro Bravo and Todd Sherman as they handed out thick blankets and hats to anyone who could use some extra warmth.

The homeless on the cold streets aren't just men. You'll find women and even young teenagers, all without a place to go.

When it comes to Arizona's winter weather, a few homeless remarked that it’s when the sun goes down that their troubles start.

"The cold at night and early in the morning is the only bad part," a homeless man in downtown Phoenix named Crash said.

"Cold weather is devastating for the homeless,” Sherman explained. “As you know, when you are in your home, if you're cold, you want to go find the thermostat switch. If you're on the street, there is no thermostat switch."

The folks at Native American Connection also handed out food and water. They do volunteer work almost every night without asking anything from the people they assist.

There are a number of places that shelter Arizona's homeless, but the problem is that there are thousands of people in need of help, and shelters fill up far too quickly.