Homeless Youth Will Help Count Their Own - www.Houseless.org

OK, so someone wants to count the "Houseless", but exactly why?

It has all the markings of needing numbers so a new business plan can be written as to get more money to employ more social workers who only bounce about collecting their paychecks.

In the United States of America, with all the hundreds of thousands of religious organizations about, taxpayers should be asking the right questions of why the problem isn't getting handled in a more efficient and better way? Maybe like actually attacking the problem in a more natural way and actually caring, rather than saying the words just to appease the "have nothing" population.

I for one don't need to know how many people are bring forced to live rough when I come across one. OH, that's right, I am one!

If I was in a position to help, I would do so in the righteous manners which my loving parents taught and which I have learned form many years of travels about the earth, as well as, being a devote follower of Scripture.

One very real truth about the United States of America is that it as a whole is very ill and in need of righteous medicine!

Homeless Youth Will Help Count Their Own

Los Angeles County is one of nine municipalities participating in a nationwide homeless count to help assess the financial needs of homeless services. This is the first time homeless youth are being used to help in the count. 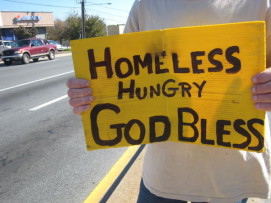 In an effort to more accurately represent the number of homeless people under the age of 25 who live in L.A. County, the Los Angeles Homeless Services Authority has enlisted homeless youth to help count their own.

This is the first time the agency is using homeless youth in its counts, relying on their expertise to help ascertain who is or isn't homeless.

"Otherwise we would really not know where the homeless youth are here locally, which is really important for our planning efforts," said Mark Silverbush, LAHSA policy and planning analyst.
LAHSA, a joint authority comprised of the City and County of Los Angeles, has partnered with several other homeless services organizations to provide the youth volunteers.

Up to 100 homeless youth will be recruited to help in the counting effort being conducted the morning of Jan. 22.

Homeless youth tend to keep later hours and counting them during school hours also helps to prevent duplication during the regular street counts, held Jan. 29-31, said Silverbush.
Some 67 cities and 18 communities are participating in the effort and LAHSA hopes to recruit 5,000 volunteers to be deployed from more than 50 sites across Los Angeles County.

In many of the previous counts, homeless youth were largely unaccounted for, but were estimated to make up only a small portion of the nation's overall homeless population.

"The youth count is a very important component of the homeless count," Silverbush said.

In 2011, it was estimated that homeless people between the ages of 18-24 made up 3.7 percent of Los Angeles County's chronically homeless population, according to a LAHSA report (.pdf).

Los Angeles is home to the largest population of chronically homeless people in the country, according to a 2012 report from the U.S. Department of Housing and Urban Development (.pdf). Los Angeles has also seen its homeless population shrink by 6.8 percent since 2011, the largest such decrease nationwide.

During the street count, volunteers will deploy with clip boards and tally sheets. They will look for obvious signs of homelessness like encampments and tents, in addition to situations where people are living in vans or RV's. During the regular counts, little to no conversation occurs between the counters and the counted, said Silverbush.

The youth count is different.

"The youth are allowed to ask questions of the other youth to ascertain whether the youth is homeless or not," said Silverbush. "Sometimes that can be confusing. Although with their expertise, they're able to know easier than those other [volunteers] would be able to."

Most of the homeless youth in Los Angeles County became homeless here, said Silverbush. In most cases they have their own children. Those that have children tend to be female, otherwise they're alone, he said.

In February, The LAHSA will conduct a demographics survey, where homeless people will be asked a number of questions pertaining to their health and safety. Like with the homeless count, the information collected will be used in advocacy for homeless services.

According to the U.S. Interagency Council on Homelessness, a number of factors contribute to a person becoming homeless, including:
For information on how you can volunteer, visit the 2013 LAHSA homeless count website.