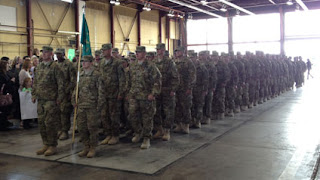 FORT WAYNE, Ind. —
The number of homeless veterans seeking help in northeastern Indiana has tripled in the past year, according to a newly released survey that one expert said isn't surprising and likely underestimates the plight of the region's homeless veterans.

The survey released Thursday shows that the number of homeless veterans in a nine-county area of Indiana's northeastern corner grew from 32 last year to 96 this year, said United Way of Allen County spokeswoman Molly Link.
Link said it's unclear what might have caused the big increase in those counties, which are: Allen, Adams, DeKalb, LaGrange, Huntington, Noble, Steuben, Wells and Whitley.

"We are not sure if there are more homeless veterans or if they are just more willing to ask for assistance since we now have shelters specifically for veterans," Link told The Journal Gazette (http://bit.ly/1ewYf1z ).

But the leader of an Indianapolis-based group that serves more than 7,700 homeless veterans in 15 states every year said he's not surprised by the numbers.

Timothy Campbell of Volunteers of America in Indianapolis said the latest statistics suggest there are about 800 homeless veterans across Indiana on any given night. But he thinks the actual number of homeless veterans is much higher.

He said the numbers do not include the veterans who staying at a friend's or relative's home because they have no home of their own.

Campbell said Indiana has a disproportionately high number of homeless veterans because it has a high incidence of residents who volunteer to serve in the military.

"We are fourth in the nation with the highest percentage of population that serves in the military," he said. "It's a tradition that is strong in Indiana."

The sluggish economy and more veterans returning home with stress-related mental and physical issues only increases the number of veterans who end up homeless, he said.

"It can be hard for them to find a job, and add to that the stress of coming home with more challenges," Campbell said.