"The Houseless" receive message of not being wanted with "No Homeless" graffiti (VIDEO) - www.Houseless.org


As it appears, not all people actually like to be around "The Houseless". Below are just a few articles related to how much worst it can get when humans become classed as the "have-less", "have-not" & "have-nothing".

I am saddened to know how Spiritually and/or mentally Corrupt people are - maybe even your neighbor - when it comes to them actually facing and acting inappropriately unto those who have been shunned and/or abused by society for nothing more than being "Houseless".

"The Houseless" is in Norfolk, Connecticut and the same type of neighborly love - NOT - as what appears to be given unto some about Edmonton, Canada is being shared via  http://norfolk-now.houseless.net


Mind you, not all are nasty in and/or about Norfolk, Connecticut.
Pray for those who are nasty and/or harmful to "The Houseless" everywhere!


EDMONTON - A Terwillegar church at the centre of a debate over plans for a supportive housing complex in the neighbourhood has been vandalized.

The words “No Homeless” were spray painted in three spots on the exterior walls of the Holy Trinity Anglican Church, at 1428 156 Street in Terwillegar Towne.

Rev. Nick Trussell said he was informed of the vandalism Wednesday evening when he got a call from the instructor of a Highlands dance group that uses the church for its practices.

“Obviously it was done with frustration and anger, but we definitely want to see that message of anger and hate turned into a message of love,” Trussell said Thursday.

Plans for a 60-unit supportive housing complex for the recently homeless are in the works for the neighbourhood. The apartment complex is set to be built on land leased by the Anglican Church to the Jasper Place Health and Wellness Centre.

Trussell said the church is considering leaving one of the markings up and painting a mural around it to demonstrate what the world could look like if there were no homeless people.

“I think this project is about providing homes and creating caring and supporting neighbourhoods and communities, and that’s what everybody wants,” he said.

The project has drawn the ire of some residents in the southwest Edmonton suburb, with some saying they’ve received little information and no consultation on the development. Others have said the neighbourhood caters primarily to families and doesn’t offer the necessary services. But other residents have said it’s important for the city not to concentrate supportive housing facilities in the inner city.

Despite the controversy, Trussell said neighbours who sit on both sides of the issue showed up to help clean up the vandalism after it was discovered.

“There was immediate reaction from the community, from both those who support the proposed apartment and those who are concerned about it,” Trussell said. “There was a group of ... residents who arrived in the evening with scrub brushes and buckets, helping us to clean up the graffiti.”

The $12.1-million development would be funded by the Alberta government and Homeward Trust and would provide tenants subsidies and support based on individual needs. The funding scheme requires community consultation. The first meeting is scheduled for Aug. 22.

Work on the project began three years ago, with the lease between the centre and church finalized this year. The space has been zoned, but a development permit has yet to be granted.

If the project proceeds, it would be the first housing development of its type in southwest Edmonton.
Police detectives from southwest division are investigating the vandalism, spokeswoman Clair Seyler said in an emailed statement. Police said they believe the vandalism happened sometime between 4 p.m. Tuesday and 5 p.m. Wednesday, when it was discovered.

Seyler said the police hate crimes unit won’t be investigating the case because it doesn’t meet the definition of a hate crime under the Criminal Code.

RELATED WITH THE ARTICLE ABOVE:

Simons: Homeless-housing project has Terwillegar Towne in an uproar 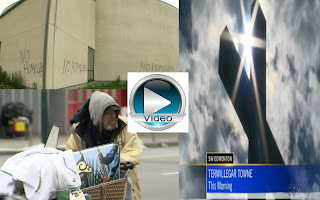 When it was first discovered Wednesday afternoon, it appeared the situation in a south side community was escalating, as a church in the area was spray painted, apparently in protest of an affordable housing complex in the area – but the reverend of the church is hoping to turn it around.

The exterior walls of the Holy Trinity Riverbend Anglican Church, on 156 Street near south Terwillegar Boulevard were spray painted with the words ‘no homeless’ in a number of places on the walls that face where the apartment building is proposed to go.

“I’m pretty sure it was intended to tell us they don’t want people to be given homes in this neighbourhood who have experienced homelessness,” Rev. Nick Trussell told CTV News Thursday
Members of the church congregation first noticed the graffiti Wednesday afternoon, and called police.

It appears the vandalism stems from controversy from a multi-unit affordable housing complex planned for land leased by the church.

“The community here is wonderful, and can be a real benefit for anybody,” Trussell said. “Especially those who need support and care.”

Officials have told CTV News in the past that the 60-unit building is part of the ‘Housing First’ initiative, which is focused on ending homelessness in Alberta.

Edmonton police confirmed officers were investigating the incident; it's believed the building was vandalized between 4 p.m. Tuesday, and 5 p.m. Wednesday.

However, the EPS Hate Crimes Unit is not investigating, as the incident does not meet the criteria for a hate crime.

Mayor Stephen Mandel said such affordable housing projects are desperately needed in Edmonton.
“Projects like that need to be done in phases, so communities can understand the role they play in helping people get over their homeless challenge,” Mandel said.

The church's reverend told CTV News he plans to turn the negative message into a positive one, by creating a mural around the graffiti with a message about ending homelessness.

Public consultation on the project is scheduled to begin in August.

With files from Ashley Molnar

Vandals who scrawled "No Homeless" across a Terwillegar church may have just inspired an idea for a mural that supports an end to homelessness.

The words were spray painted on the walls of the Holy Trinity Riverbend Anglican Church, on 156 Street near south Terwillegar Boulevard, The Jasper Place Health and Wellness Centre has leased land from the church, and intends to build a 60-unit supportive housing complex for the recently homeless.

The church wouldn't be involved in the building or operations of the complex.

Edmonton Police confirmed officers were investigating the incident, they believe the building was vandalized sometime between 4 p.m. Tuesday, and 5 p.m. Wednesday.

Rev. Nick Trussell said a dance group that uses the church for rehearsal alerted him to the graffiti Wednesday night.

Trussell said he is aware that the markings are evidence of concerns that some residents may have with the complex, but adds that there will be time for consultation and discussion.

"It was unfortunate and I think not an appropriate expression of people's frustration or concern," he said.

"Some of the graffiti will be removed. We're contemplating the idea of maybe using those words "no homeless" to change it from a message of fear into a message of hope."

The project, which would cost $12.1 million, would be funded by the province.

Homeward Trust would assist tenants with subsidies and support.

Detectives from southwest division are investigating a mischief complaint in connection to the graffiti, said EPS spokeswoman Clair Seyler.

However, she said that the Hate Crimes Unit is not involved with the investigation as the incident "does not meet the criteria of a hate crime under the Criminal Code."

A public meeting is slated for Aug. 22, if the project is given the green light, it would be the first housing project of its kind in southwest Edmonton.