Just another faux Nashville nasty tricking the world that they sing about loving thy neighbor? Did Katie Layne Quackenbush, 26 leave the scene where she shot a homeless man so she could sober up?

More links about her at the end of the articles

Aspiring singer, 26, is charged with attempted murder of homeless man, 54, who she shot twice after claiming he threatened her life as she sat in her Porsche SUV


An aspiring country music singer and rapper has been charged with attempted murder after shooting a homeless man who she says threatened her life during a late night row in Nashville.

Katie Layne Quackenbush, 26, shot Gerald Melton, 54, twice during an altercation outside her Porsche SUV in Nashville's Music Row on August 26.

It was 3am and Melton, who was trying to sleep, complained to Katie and a friend who was with her that her music was too loud, according to police.

The pair had been at a nightclub and she was bringing her friend back to her own car when the argument ensued.

Police say that after shouting at one another, Melton retreated but Quackenbush got out of her $60,000 Porsche Cayenne and fired two shots at him, wounding him in the stomach.

Quackenbush, an aspiring country singer and rapper and mother-of-one, fled the scene afterwards to go and have breakfast at a restaurant with her friend. 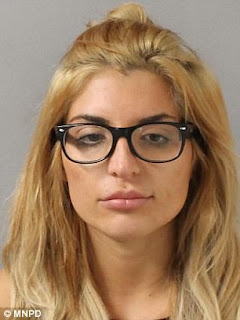 Katie Layne Quackenbusg, 26, (above) was charged with attempted murder for shooting Gerald Melton (below in a previous mugshot), a homeless man, twice on August 26 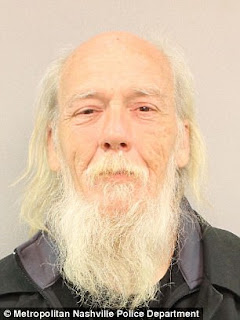 Melton was taken to the hospital where he remains. His condition is not known.

The next day, after police issued an appeal to find 'two blonde women' suspected of shooting him, she handed herself in to police. Her version of events differ from the one given by police.


According to her father Jesse, a personal injury and criminal defense attorney in Amarillo, Texas, Quackenbush feared for her life when she fired her gun.

He said she and her friend had been at a nightclub and that his daughter was taking her friend back to her car when they saw Melton accosting another group of girls.

As they pulled up, they noticed this homeless guy out ahead.
'He was yelling and screaming at another group of girls which looked like sorority girls from the local university.

'It seemed he was getting into a physical altercation with one of them,' Mr. Quackenbush told DailyMail.com on Tuesday.

He claimed Melton then approached his daughter's car and started 'screaming and banging on the windows'.

He called her a 'sand n***er w**re' and threatened to kill her if she did not turn her music down, he added. 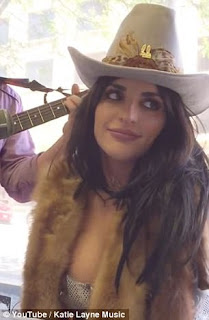 The 26-year-old is an aspiring singer and rapper in Nashville, Tennessee. She is seen above in images from her music videos and YouTube channels. 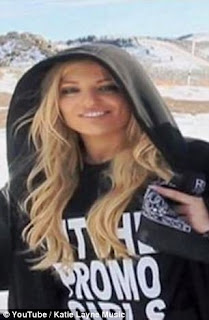 Frightened for her life, he said his daughter hopped out of the vehicle and fired two 'warning shots' from her gun but did not intend to strike the man.

'She said "I have a gun" twice. He came at her, she fired what she thought was a warning shot and fired a second one when he kept coming at her.

'She ran back to the car and left with her friend,' her father said.

The pair then went to a restaurant to have breakfast and Quackenbush 'kept her composure probably better than any police officer would have,' her father said.

When they returned to the scene so that her friend could finally retrieve her car, it was swarming with police and had been taped off.

'The next day they're hearing in the news that police are looking for two blonde females who shot a homeless man,' Mr. Quackenbush continued.

Upon his advice, his daughter contacted police and handed in the gun which, her father said, she has for self-protection.

Quackenbush moved to Nashville from her native Texas to 'like a lot of people', pursue a career in country music, her father said.

She has a five-year-old son who, despite 'struggling to make a living', she puts through private school.

In 2013, Quackenbush was arrested for assault causing bodily injury after a 'squabble' with her mother. The charges were later dropped.


Her father said police in Nashville are using her as a 'poster child' for the city's ongoing homeless problems.

He believes she is being unfairly prosecuted and that authorities are intentionally ignoring any threat Melton may have posed.

'The guy's obviously schizophrenic in the opinion of my daughter and her friend and other people,' Mr. Quackenbush said.

Melton's criminal record in Nashville dates back to 2014 and includes several arrests for criminal trespassing and failing to appear in court.

Quackenbush was released from jail on a $25,000 bond and is awaiting her next court appearance.
She goes by the artist name Katie Layne and previously uploaded her collection of rap and country music songs to YouTube.

Katie Layne Quackenbush moved to Nashville to become a musician, but cops say she put two bullets in man’s stomach after an argument over her luxury car.

A Tennessee woman arrested Monday for allegedly shooting a homeless man after he asked her to move her Porsche from his sleeping area has a violent past.

Katie Layne Quackenbush is accused of shooting Gerald Melton on Aug. 26 after the two argued over where she parked in Nashville. Melton had been sleeping on a sidewalk when he “became disturbed by exhaust fumes and loud music” from Quackenbush’s car at 3 a.m., according to Nashville police. The two allegedly began arguing when Melton asked that the vehicle be moved.
Melton left the area and did not block Quackenbush from leaving, according to the police affidavit. The two began arguing again when he returned to the spot where he had been trying to sleep, police said. This time Quackenbush allegedly got out of her car with a gun and fired two shots before getting back in her car and leaving.

Melton, 54, remains hospitalized after being shot twice in the abdomen.

Quackenbush’s father, Jesse Quackenbush told The Daily Beast that she was acting in self defense after Melton “accosted” his daughter and her friend and threatened to kill them.


“What you have here is a 26-year old woman whose life is basically ruined on an international basis because of knee jerk and hillbilly cops in Nashville that rush to judgement before they even complete their investigation,” he said.

Quackenbush had been out with a friend in downtown Nashville, who was an “eyewitness to this event,” Jesse said. Since the friend’s car was parked about six blocks away from the club they were at, Quackenbush offered to drop the friend off at her car.

They continued to talk in Quackenbush’s car when Melton began “screaming and yelling” explicit threats “at the top of his lungs” and threatened to kill the two women, Jesse said. Melton then allegedly walked away to begin yelling at another group of girls nearby.

After Melton walked away, Jesse said his daughter took out her gun to escort the friend to her car. When Quackenbush walked around her car Melton allegedly began to “accost” her again. She then told Melton twice that she had a gun and to stay away.

“He kept coming at her and increasing the volume of his voice and she thought what she thought was a warning shot would make him run away,” Jesse said. “She purposefully aimed away from him but unfortunately she hit him. And he kept coming so she shot again, again a warning shot, down at a downward trajectory and thinking that would scare him away.”

Jesse said his daughter “closed her eyes when she shot both times.”

Melton allegedly continued to come at the Quackenbush so she got back inside her car and drove away. He said his daughter turned herself in and has been cooperating with police since the incident.
“She was merely trying to defend herself,” Jesse said. “She wasn’t trying to hurt anyone to begin with, especially not trying to kill someone.”

Jesse said Quackenbush is the single mother of a 5-year old son and moved to Nashville to launch her career as a musician.

NASHVILLE, TN (WSMV) - The News 4 I-Team obtained exclusive surveillance video of the Music Row neighborhood where a homeless man was shot, and it reveals many people in the area who could be potential witnesses.

Police said Quackenbush, charged with attempted murder, got into an argument with Melton.
The surveillance video shows at roughly 3:19 a.m., a fire truck rushes to the scene followed by several Metro police cruisers.

Several cars also drive in that area at the same time, all indicating there could be several witnesses to corroborate either Quackenbush or Melton’s versions of what happened.

Metro police confirm that another witness working security in that area alerted investigators to the shooting.

The I-Team has also obtained video of Melton, recorded in December 2016. In the video, Melton is seen playing a guitar and singing.

The video was made by Music Row veteran Sharon Corbitt-House, who started a Youcaring page to help Melton.

“He lived in the parking lot behind our building for about a year,” Corbitt-House said. “I had no clue that he was as talented as he was.”

That Youcaring page did raise more than $2,000 that Corbitt-House said helped Melton to move into temporary housing on Murfreesboro Road. But not long after, he was back living on the streets of Music Row.

“I never experienced it,” Corbitt-House said. “I had a heard a couple of people had had incidents with him where he raised his voice and had gotten angered.”

Police say the victim, 54-year-old Gerald Melton, was trying to sleep on the sidewalk in the 900 block of 19th Avenue South around 3 a.m. when he noticed exhaust fumes and loud music coming from an SUV.

Melton asked the driver, 26-year-old Katie Quackenbush, to move the vehicle. The two then began arguing and yelling at each other.

Melton said he walked back to where he was sleeping when police say Quackenbush got out of the SUV armed and fired two shots at Melton.