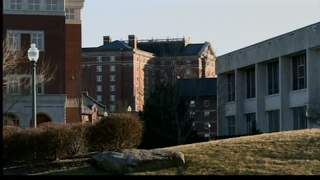 NEW BRITAIN — Members of Community Central, a community-based program affiliated with Central Connecticut State University, and Briggitte Brown, community organizer for the city of New Britain, recently sat down with Michael Lexton Hawkins, a formerly homeless New Britain resident, to discuss the causes of homelessness and to work toward solutions.

Hannah Hurwitz, a member of Community Central, said, “We’re basically trying to collect information to put everything into perspective. We want to learn their stories, find out about the barriers they face, and find ways to help them overcome those barriers. We want to see them succeed, get a good job and get back on their feet.”

Hawkins had been a longtime homeless resident. He has also been living with AIDS since 1987. A recovering drug addict, Hawkins has been clean for three years. He is now living in an apartment in New Britain, is on disability and volunteers at organizations such as Safety Counts.

At the meeting, Hawkins shared what it was like to experience homelessness.
“I know the feeling of hopelessness and the various things that cause it,” said Hawkins. “There are so many organizations that say they will help you. However, if you don’t have a foundation, if you don’t have warmth and security, where’s the hope? My biggest obstacle was myself and my way of thinking.”

John Carey, an intern from CCSU and an environmental geography major with a geographical information systems minor, explained the degrees of homelessness.

“Some have been homeless before and are no longer,” said Carey. “Others are staying with friends and have their basic needs provided. Some are living in shelters or churches, and then there’s the people actually living on the streets.”

Carey is currently compiling an online database that maps out places where the homeless of New Britain can go for food, health care, recreation, housing assistance and behavioral help as well resources such as the police and fire departments.

“My goal is to make this database as user-friendly as possible,” Carey said. “I also want to work with public libraries to get the homeless a library card they can use to read or use the Internet at the library even if they can’t check out books.”

There are many reasons people become homeless, according to Hawkins.

“Situations happen in life, I don’t blame anyone,” said Hawkins. “Some people drink, some people use drugs, with others it’s psychological. Some people become homeless through no fault of their own. I had a friend who was an executive before his wife left him and took his child. The bottom line is we’re human beings, and it could happen to any of us.”

Brown discussed the mayor’s plan to create a homeless commission where homeless people can give advice to policy makers directly. She also discussed the upcoming Brunch and Conversation event taking place at Community Central April 6 at 11 a.m.

“That’s beautiful, the first time I’ve seen something like this,” Hawkins said.

Hawkins has also written a book of poetry, “To Touch a Nerve,” based on his experience with homelessness, AIDS and prison. The book is slated for release at the end of the month through the AuthorHouse publishing company. It is the first of three books he plans to release. He plans to donate money that he receives from the sales to organizations that support the homeless.

In 2008, Hawkins served a six-month prison term for using and selling drugs.

“When I was in prison, they helped me treat my heroin and cocaine addiction,” Hawkins said. “I wasn’t taking any HIV medication and I wasn’t being treated for my bipolar disorder. The agencies told me that I was killing myself and that I needed to receive treatment. Prison was a curse, but it was also a blessing in disguise. It was a rude awakening to a spiritual awakening.”

“I believe I’m here for a reason, through the grace of God,” Hawkins said. “I’m glad to be part of the solution, not part of the problem today. It’s not going to happen overnight, I’m not looking for miracles, but if we can help one person or a few it’s worth it.”

For more information on Community Central, call Hurwitz at (203) 843-2121, or visit ccsu.edu/communitycentral